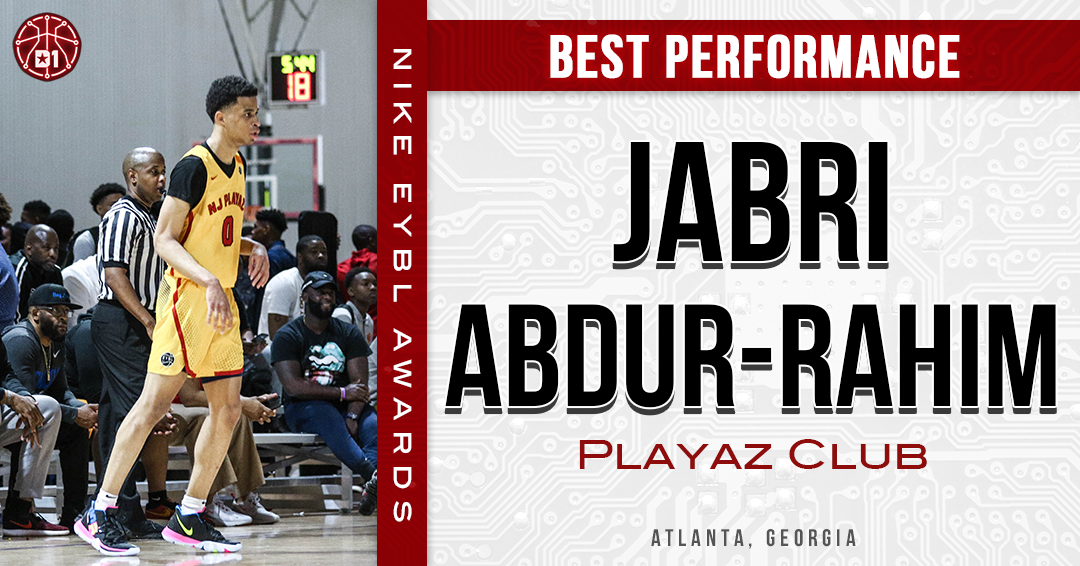 The Playaz Club junior put up back-to-back 40-point showings, scoring 41 points versus the Texas Titans, following it up with an even stronger performance in a narrow 94-91 loss to the Mac Irvin Fire (3-1).

Abdur-Rahim dropped 44 points on 15-for-23 shooting,  earning EYBL Atlanta's Performance of the Session while single-handedly keeping the Playaz in the game against the Fire. The 6-foot-7 junior went 10-for-15 from deep while adding seven rebounds, two assists and zero turnovers. The Blair Academy (NJ) product and reigning Gatorade State Player of the Year was lights out, and Assistant Director Kiela Brevard was left impressed.

"Those two 40 point games have to be two of the best back-to-back performances in EYBL history," Brevard said. "We would have liked to win both games he scored 40, but it was an adjustment for everyone playing under professional rules and the professional 3-point line. We did a good job of adjusting through the session."

"Jabri obviously adjusted quicker than others."

"Tim did a great job of coaching these kids up," Brevard said. "He instills a toughness and the kids listen."

Abdur-Rahim was the focal point of Thomas' offense, and it should remain that way moving forward, especially if he continues to get help from 6-foot-10 junior Elijah Hutchins-Everett and the rest of the Playaz supporting case.

"(Elijah) was one of my leaders this week also, and if he could have stayed out of foul trouble, I think we would have a different record. He's still averaging 12 and 9, which is pretty good for a kid who didn’t get to play much because he was in foul trouble all weekend."

Heading into the next slate of games, Brevard, Thomas, and the Playaz will be leaning on their swingman to keep them in Peach Jam contention. In four games, Abdur-Rahim averaged 28.0 points, 46.8 FG%, 6.8 rebounds, 2.5 assists, 1.0 steals, and 1.5 turnovers while shooting 15-for-34 from the 3-point line.

"(Jabri) was the leader on the floor, diving on the floor, giving everything he had," Brevard said. "He set the tone and I believe that's going to help us going into session two."