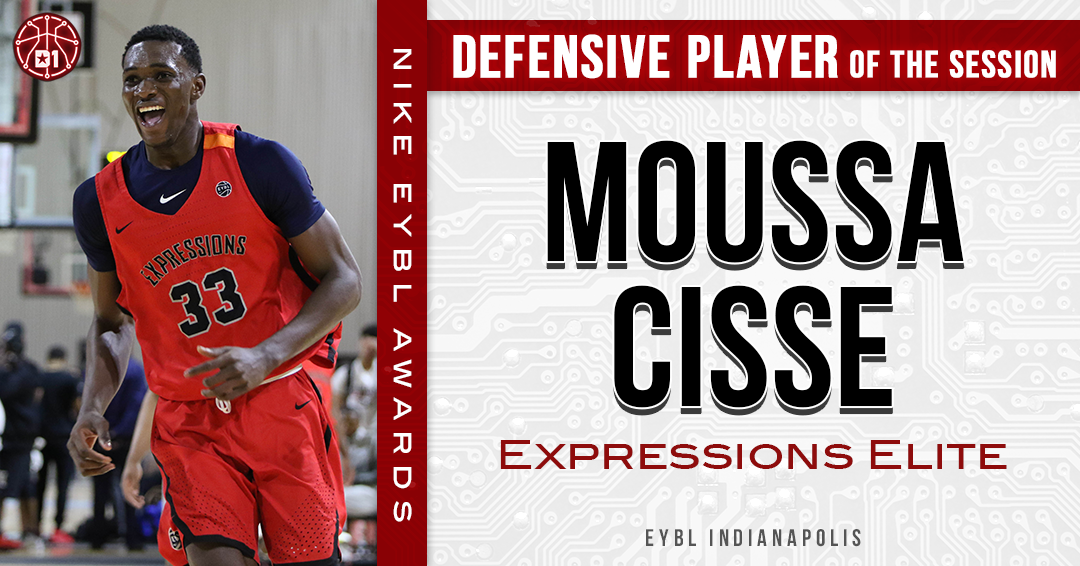 As a team, Expressions Elite used Indianapolis to move ever so close to a Peach Jam berth.

As a player, Moussa Cisse used Indianapolis' second EYBL session to establish himself as one of the most dominant defensive stoppers in the country.

Expressions went 4-0 in Indy behind a balanced, cohesive unit, and the Boston-based EYBL affiliate sits with a 6-2 record for the season. Several members of the rotation played well, but Cisse was arguably the biggest difference-maker.

Expressions Elite's 6-foot-10, 215-pound sophomore was a rim-protecting machine over the weekend, and it resulted in some fairly impressive numbers as Cisse averaged 4.5 swats per game.

Cisse blocked six shots in the opener, seven more in Expressions' Battle for Boston win of BABC, and concluded the session with five blocks against Brad Beal Elite. Cisse wasn't credited with a block against the Alabama Fusion, but he contested countless shots in that ballgame and likely was at the wrong end of a couple of stat inaccuracies. The point is - Cisse is a monster defensively.

The Christ The King (NY) product used his length, athleticism, and natural timing to become a defensive nightmare, but that's not where his production stops; Cisse grabbed 36 defensive rebounds in four games en route to a total of 57 boards for the session. He grabbed 21 rebounds against BABC and nabbed 16 more against the Georgia Stars in the session opener. Cisse is also efficient without excessively fouling, as the 2021 big man averages a hair over three fouls per game.

Simply put, there aren't many big men who have the defensive make-up of Cisse. He is almost always in the proper position, never forgets to block out, and rarely gets beat on a pump-fake.

Check out the video below to see Cisse's defensive highlights from the weekend, courtesy of Mike Yagmin and The Hoop Hustle.