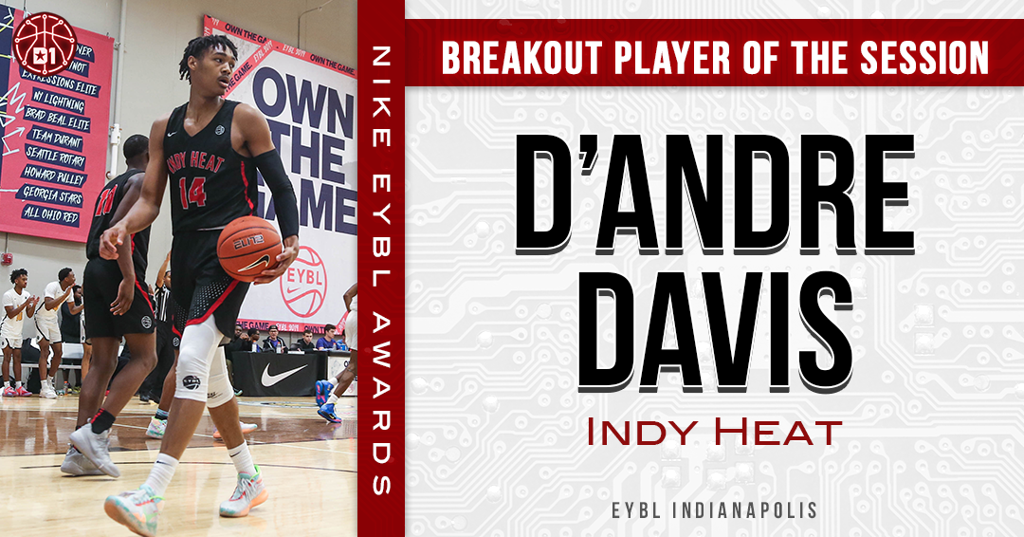 After the first session, Indy Heat teammates Jaden Ivey and Nijel Pack earned All-Breakout selections and both were strong contenders for the top honors.

During session two, another Indy Heat guard stepped up, and this particular four-game performance was too hard to ignore for the top billing.

6-foot-6 junior guard D'Andre Davis put the EYBL on notice while defending home turf at EYBL Indianapolis, averaging 19.5 points and six rebounds while knocking down nine of his 22 three-point attempts (40.9%). Davis (247 3-star) is a tough, aggressive guard that doesn't back down from physicality, and the Lawrence Central (IN) product displaying those traits with regularity at the Pacers' Athletic Center. Davis saved his best for last in Indy, putting up 26 points and four rebounds in a session-closing win over AOT.

Indy Heat head coach Jason Delaney is thoroughly impressed by his sizable guard, and he pointed to his developing versatility as his biggest asset.

"D’Andre is a versatile threat who has accepted the challenge of not only being a force on offense but a lockdown defender as well," said Delaney. "He’s a player that fills many different categories for us on the stat sheet."

As mentioned before, this award could have easily gone to Pack and Ivey the last session, and both guards stood out once again in Indianapolis alongside Davis. Throw in a healthy Justin Powell (247 4-star), and the Heat have one of the best backcourts in the league.

Davis remains verbally-committed to Nebraska after the firing of Tim Miles, and it looks as if the Cornhuskers have an instant-impact player heading to Lincoln in 2020.

Check out Davis' highlights below courtesy of Courtside Films.