Pospichal talks AAU hoops, college recruitment and who he thinks is the best coach in the EYBL 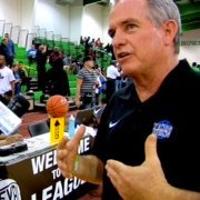 With an Elite Youth Basketball League record of 10-8, the Texas Titans did enough to earn an at-large selection for the 2013 Peach Jam. The Titans battled the injury bug the entire season, playing without stud recruits King McClure and Mickey Mitchell.

Led by floor general Alex Robinson, they proved to be one of the most poised teams on the EYBL circuit. With rising stars DJ Hogg, Tyler Davis and the return of the highly-touted scoring guard McClure, the Titans are a tremendously talented squad who will likely make some noise in July.

Indi Hoops lead reporter Jarrell Strong got the opportunity to interview Scott Pospichal, the head coach of the Texas Titans. Here's what Pospichal had to say about Amateur Athletic Union basketball, his players and who he thinks is the best coach in EYBL.

Q. When you started coaching your squad, what was your vision and how did you end up in club basketball?
A. I was a basketball coach for a long time, but my son is the reason I started coaching AAU. I just started doing it so I could get him and his friends out to play. I never thought things would get this big, so fast. But it really started off as a coach and son thing.

Q. What is your favorite AAU win and aginst who?
A. Probably in 2009. The sixth grade AAU National Quarterfinal game against J-Smooth at the Boo Williams Sportsplex in Virginia. The other team brought in a couple new players for a bracket game and they hadn't played in pool play. They just came for a bracket game, but we ended up winning game by 12 or 13 points. Second would have to be last year's Peach Jam finals

Q. Who are the players to watch on your team and who are the x-factors?
A. Tyler Davis, DJ Hogg and Jackson Forbes are the guys to watch for us. The x-factors are King McClure and Alex Robinson. King has been cleared to play and will be returning to us for the Peach Jam, which will provide us a huge lift.

Q. What college coaches are getting in contact with you the most about your players?
A. Well, today alone was Texas A&M, Arizona and Notre Dame. The Texas A&M staff have been very proactive with the kids and doing the best job.

Q. Most difficult team you played against in the EYBL?
A. Houston Hoops. They are tough.

Q. In your opinion, who is the best coach in EYBL?
A. Leo Papile from BABC. He gets the job done, gets the kids to play the way he wants them to play. One of the finest in the EYBL.