Trier rises to the top of the EYBL 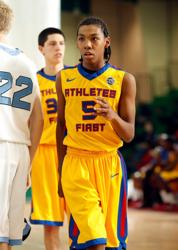 Athletes First guard Allonzo Trier ran away with the fan voting and the award for D1 Circuit's Most Improved Player of the Year for the 2013 season of the Elite Youth Basketball League.

The 2015 combo-guard electrified the league with his volume scoring and unrivaled on-court passion. He averaged 20.2 points per game and five rebounds per game in 2013, up from averages of 7.3 points and 2.6 rebounds per game.

Here's how the voting broke down.

Jonah Steinmeyer – SG | Allonzo Trier (2015) | Athletes First
What’s great about the EYBL is every player has a chance to groom their skills against the best competition in the country.

The best way to get better is to play the best, plain and simple. Allonzo Trier did exactly that, and more. Trier went from a key contributor on the 2012 Athletes First team to their top option on the offensive end in 2013. He can play both guard positions exceptionally well and tailors his game to either spot.

He can run the point and get others involved or play off-ball and look to beat defenders off the dribble, one-on-one. To me, he has the total offensive package and that’s in large part due to his determination to get better.

Trier’s 2013 campaign is the epitome of improvement, and is best summed up by his scoring production.

The best part is we get to watch the 2015 guard return to the EYBL again for another season.

While Oubre is certainly deserving of this award, it’s very hard to look past what Trier accomplished this season. A role player during his freshmen EYBL season, Trier exploded onto the scene this year. Blessed with a quick first step and the ability to absorb contact in the lane, Trier quickly realized what he needed to do in order to be successful – be aggressive.

Combine his goal to outwork everyone on the floor with his elite talent and the results speak for themselves.

Owen Kinsky – SF | Kelly Oubre Jr. (2014) | Houston Hoops
This was a relatively difficult one to pick. Both Oubre and Allonzo Trier made huge leaps this season from their 2012 numbers. After agonizing over the two, Oubre got the final vote.

Oubre managed to increase his scoring (5.2 PPG to 16.1 PPG) mainly as a result of an extra 15.6 minutes per game this season. However, Oubre also managed to bump up all of his percentages, with a huge jump in his field goal, free throw and three point percentages.

With Oubre’s increased minutes, he managed to become significantly more efficient. Add in the fact that his improvements were a big reason for Houston Hoops' success and Peach Jam berth and it adds up to a very solid case for most improved player.