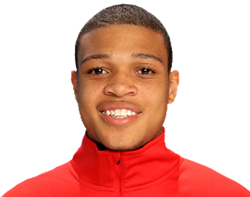 Eliite Youth Basketball League standout Larry Austin Jr. has proven to be one of the premier point guards on the circuit.

Standing at 6-foot-1, Austin plays with a tenacity and physicality that helps him play bigger than his size. With offers from Oklahoma State, Missouri, Illinois Memphis, Stanford and Florida State, high-major colleges have definitely taken note of Austin's on-court passion and leadership.

Alec Kinsky got a chance to catch up with the talented guard at the fourth session of the 2013 EYBL in Minneapolis, Minn. Here's what he had to say:

Q. Which college interest you the most? Any favorites?
A. I like all my schools that are recruiting me right now. I have Oklahoma State, Missouri, Illinois, Memphis, Stanford, Florida State. I like all of them, really.

Q. Who has been the best guard to match up against in the EYBL?
A. All the guards in the EYBL are good, but not sure who is the best.