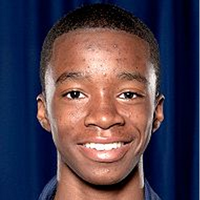 On May 12, ultra-quick point guard Edmond Sumner gave a verbal commitment to Coach Chris Mack and the Xavier Musketeers. This came as a surprise to most, as his commitment came fairly early in the recruiting process.

When Sumner was in Minneapolis, Minn., for the fourth session of the 2013 Elite Youth Basketball League, he sat down with Alec Kinsky to talk about the rigors of playing in the EYBL, his relationship with his teammates and his decision to commit to Xavier.

Q. What is the main difference playing in the high school and the EYBL?
A. The competition. It’s like totally different. Everybody in AAU can play. It’s just the competition level is completely different

Q. So you guys are called The Family. Does that embody the type of environment you guys have as a team? Are you real close?
A. Yeah we are real close like a family. We stick together. I like our name. It fits us really well.

Q. Verbal commitment to Xavier. What interested you about them and Coach Mack?
A. Well Xavier, they was like the first college to call me last year. And they was recruiting me hardest and they showed me the most love. At first I was going to wait until like after the summer, but I started to realize I was most people’s like third option. And to them I was their first option. So I wanted to go somewhere where I was their main priority.

Q. What helped that decision? Playing style? Academics?
A. It’s just their playing style. They play my style. They told me, they play two point guards. Which they actually do. They’re not lying cause I’ve watched them play.

Q. Who is the toughest guard you’ve had to guard in the EYBL?
A. Uhhh (laughs) ... probably Tyler Ulis. Yeah Ulis. Because he’s so small and quick.