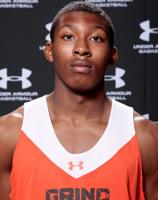 King McClure is a force. He possesses a rare combination of size, speed, strength and athleticism. He attacks the basket with the utmost aggression and can finish as well as anyone in his class. He completely dominated the 16U EYBL Championship in 2012 and headed into this season as one of the most talented combo guards in the country.

The kicker? A dislocated patella forced him to miss all four regular season EYBL sessions, disallowing him to display his talents in front of potential college suitors. For a kid that hates to even come out of the game, not being able to contribute and help his teammates was agonizing.

McClure made his return at the Peach Jam, exploding on to the scene by putting up gaudy offensive numbers against arguably the toughest Pool competition. He created a buzz, mainly because the average fan was just learning who McClure was. HIs numbers (21.8 PPG (52.2 FG%), 2.4 RPG, 1.6 SPG) speak for themselves, but his on-court poise and demeanor are what make him an elite prospect.

I recently had the chance to sit down with McClure, addressing his experiences at the Peach Jam, what's important to him when deciding on a college, and the toughest matchup he faced in the EYBL.

Q. Can you explain how exciting it is for you coming back from an injury and setting your season off?

A. You know this is my second year at the Peach Jam and it's an amazing experience. I love being in this atmosphere. All the college coaches, all the people, all the fans you know. All the media just coming up to you and loving you. It's a great experience to be here.

The first win we played Team Scan. Chris McCullough. You know Chris McCullough is a beast. He's a future pro I think. He played great. Second game we played Boo Williams. We lost. Since they had an ineligible player, we ended up winning that game. So, we'll take a win whichever way we can get it. Third game, we played Mac Irvin, Jahlil Okafor and Cliff Alexander. Lottery picks. Future pros. They killed us. Last game we played Jackson Tigers and Malik Newman. Great player, one of the best players in America. We held him down. we contained him the best that we could. So we played pretty good.

Q. How has playing in the EYBL improved your game individually differently from high school?

Q. What matters most when you're gonna decide? Playing time? Academics? Style of play? The coach?

A. You know, since I come from an academic family, my dad has principal. My mom is all about academics for the school. Academics is a pretty big thing. But also I want to be able to go somewhere where I can make an impact my freshmen year. I don't have to start necessarily, but I want to play and get some good minutes. If I can start, then it's gonna be. But I'm gonna have to fight anywhere I go. So whichever coach can give me that, and pretty much make me a better man on and off the court, that's where I wanna go.

Q. Can you give us an update on your recruitment?

A. Recently the hardest player in this tournament? I'm gonna have to give it to Malik Newman. Malik Newman is…he's a beast. He's real good. I'll have to say he's probably the best player we've played against. Definitely the best for a guard that I've seen here.