If you ask Omari Spellman about what he needs to improve, his answer will be simple - and it’s the lone aspect of his game that is keeping the 6-foot-9, 260-pound junior from becoming virtually unstoppable.

“I’ve been saying it for a long time,” Spellman honestly confessed. “My conditioning.”

Fresh off a transfer from North Royalton High School (OH) to MacDuffie School in Massachusetts, the PSA Cardinals (NY) 16U star is ready to tackle his greatest weakness. Blessed with unbelievable skills and footwork for a young man of his size, Spellman has acknowledged his major flaw and is ready to put his conditioning issues behind him.

“It’s two things; my conditioning and my explosiveness,” Spellman said, who is already ranked 18th in the 2016 class by ESPN. “I think when those two things improve, I will be the best in the country.”

Talk can be cheap, but not for Spellman. His day in the gym starts before dawn, arriving at 5:45 a.m., starting his day off with one goal put simply: “Constant improvement.” His focus is on improving his already gifted fundamentals, as well as drills to improve his quickness and explosiveness.

After school, Spellman heads straight to the weight room for his daily weight lifting training. Then, it’s dinner, homework, sleep and repeat. He has offers from over 20 division one schools, including Arizona, Florida, Indiana, Pitt and Wisconsin - but that doesn’t get to his head. Improvement is on his mind every second of the day.

Spellman isn’t the only one adopting this workout regimen – his MacDuffie teammates have bought into a similar mindset. Running with Spellman is his PSA Cardinals 16U teammate Unique McLean, a freak of an athlete who already shares on-court chemistry with Spellman. Also on the squad is fellow-transfer and Travelers guard Brad Calipari. Son of University of Kentucky coach John Calipari, Brad is an impressive shooter who is almost fully recovered from a torn ACL late in 2013. 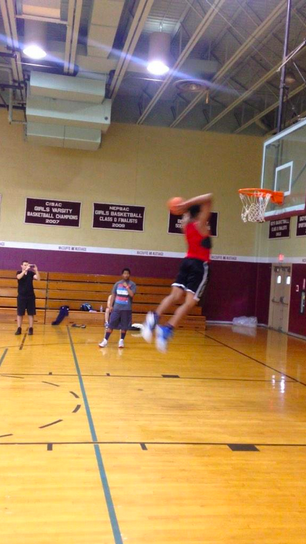 Spellman rising for a dunk during a workout last week. 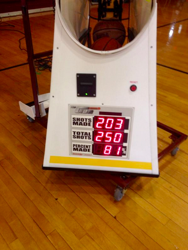 When asked about his teammates, Spellman admitted the importance of McLean and Calipari. The rest of his answer showed what type of teammate he is, as he ranted and raved about the rest of his running mates, providing scouting reports on each one.

“It’s a lot more talent than just those two (McLean and Calipari),” Spellman stated. “We have Kashaun Hicks. He’s a 6-foot-5 shooting guard with range out to 26 feet. Jaylen Franklin is a strong guard, he never gets sped up and always stays under control. Jordy Tshimanga is a force to be reckoned with down low. Jair Johnson can flat out jump. His athleticism is incredible and he has a crazy motor. Carlos Gonzalez is an absolute pick-pocket on defense. I don’t know too many guys quicker in transition.”

The glowing review of his teammates means a little more when taking into consideration the talent level that Spellman has been recently surrounded by. In August, Spellman was one of seven American-born incoming juniors to be selected to the Nike Global Challenge, an eight-team event pitting the top four American teams against four international teams. Battling against some of the most athletically-gifted big men in the country, Spellman averaged 12.4 points, 4.2 rebounds and shot 54.2% from the field in four games. These numbers are even more impressive in that he played an average of 17.8 minutes – less than half of the 40-minute total. It’s evident that Spellman is as efficient as anyone in the country when he’s on the court – and he plans to make sure he stays there.

Jason Forde, who has coached Spellman since he was a sixth-grader for the PSA Cardinals, knows he hasn’t yet fully tapped into his potential.

“Being part of Omari’s overall development has been a great experience,” Forde explained. “He has been with our program since he was 12 and we could see from then that he was gifted with soft hands and good footwork.”

How good can he be? Forde is eager to see, just like the rest of us.

“Omari’s ceiling is quite high. He is extremely competitive and is very eager to learn as much as he can about the game as he builds on an expands his skillset.”

Ballas TV owner Sherwyn Cooper, who specializes in New England hoops coverage, has Spellman as his No. 1 ranked recruit in 2016. His scouting report provided some color to Spellman’s multiple skillsets.

“He’s huge,” Cooper said, both speaking to his stature and importance on the court. “Surprising athleticism. He has a good feel in the post, he can face up, he can step out and hit the three. Good shot blocker too. He's a monster.”

It’s an exciting time for Spellman, and he is embracing every moment of it. He knows how good he could be, and that’s all that truly matters.

“I think I’m definitely on my way to a big junior season, bigger than most expect.” Spellman said, brimming with confidence.

“I’m getting better. And you all should be scared.”