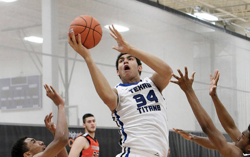 Prior to the 2013-14 season, Tyler Davis was deemed ineligible to play. The news was well publicized and highly controversial, as it is very rare to see a student-athlete lose an entire season of eligibility

Transferring from Frisco Liberty to Plano West turned out to be a move that, for some reason, was unacceptable to some. Due to a protest from Frisco’s head coach, who claimed Tyler’s only reason for transferring was to play with his friends, Davis was ruled ineligible by the UIL Executive Committee.

“It was very unfortunate that his former high school coach took the stance that he did,” coach Scott Pospichal explained, Davis’ summer league coach for the Texas Titans. “It’s supposed to be about the kids. When I asked why he was doing this to Tyler, his response was ‘you know, somewhere along the way I have to do what’s best for my career.’ At that point, I didn’t need to hear any more. There is no reasoning with that mindset in youth sports.”

This piece is not meant to complain or whine about the committee’s ruling. A decision was made, and Davis – as well as his new Plano West teammates – had to live with ruling. This piece could be spent pointing fingers. It could be spent explaining why the ruling was arbitrary, unjust, and downright cruel.

But it won’t – because Tyler Davis took the high road – and I will too. The Texas A&M-commit can look back and laugh about it now, as this setback laid the landscape for his incredibly bright future.

That’s not to say the decision didn’t severely impact Davis. Initially, the 6-foot-9, 270-pound big man let the ruling eat away at him. Combined with November knee surgery, not being on the court – and with his teammates – had Davis in the dumps.

“It was tough, man.” Davis said. “No one wants to sit out a few months and not play basketball. It was depressing. I couldn’t move. I couldn’t shoot around. I couldn’t play even when I was healthy. I was really sad all of the time.” 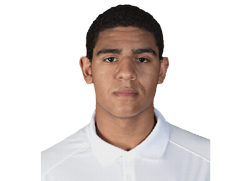 Somewhere along the line, his mentality took a 180-degree turn.

“I think with Tyler, and I think it took some time to realize this, is he saw the value in what he was becoming,” Pospichal said. “He was able to look at the bigger picture – more than what is in front of him right now. It helped having Avery Johnson Sr. around, mentoring him. Tyler was able to see that it’s not about the next 30 days, 60 days.”

Relying on his faith, family, coaches and friends, Davis realized that this was an opportunity to improve. Dubbed by Pospichal as having ‘the best mom ever in youth sports,’ the Titans’ leader knew Davis would conquer this setback.

“With the help of my mom, my family and everyone around me, they told me to keep my head up,” Davis explained. “I prayed a lot. It felt like I was falling behind everyone. I knew with my work ethic that I would be fine. It took a lot of time, but it made me so much better.”

Since the ruling took away his 2013-14 campaign, Davis’ junior season was essentially the Nike EYBL.

The EYBL turned out to be a godsend for Davis, but his Titans’ career also began with some questions. Davis joined the Texas Titans as an eighth-grader and entered his 9th-grade year at 350 pounds. Pospicahl sold Davis to Titans’ owner Kenny Troutt, explaining the intangibles that Davis brought to the table.

“What I first noticed about Tyler, next to his size, was his instincts,” Pospichal said. “He had a lot of things you can’t teach. He had great hands and great feet. I’ll never forget when I was talking to Kenny (Troutt). I said ‘Kenny, he’s got what we can’t teach. He has incredible instincts. Just watch him.”

Troutt not only agreed, but got the stamp of approval from current Los Angeles Laker and former Texas Titans’ teammate Julius Randle.

“Julius wanted him to play on the 2013 team and play up two years. That’s the impact Tyler made on our group. Tyler doesn’t back away. Tyler doesn’t run. Tyler runs to the moment. 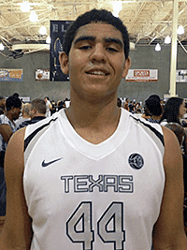 Davis entered the 2014 EYBL season in the best shape of his life – and had a noticeable chip on his shoulder.

“The competition in the EYBL is top notch, every game you are playing against top players.” Davis said. “With each session, I think I improved. My knee was getting better. Once I got to the LeBron skills academy, I feel like my game took the next step. “

The Peach Jam immediately followed the LeBron James Skills Academy, and Davis was the best he’s ever been. In 6 playoff games, Davis averaged 19.0 points, 11.2 rebounds, 2.8 blocks while shooting 59% from the floor. The big man was on the biggest stage in summer basketball, and he cemented himself on the short list of best big men in America.

The end of the season marked the end of an era for Texas Titans’ basketball, and Coach Pospichal couldn’t appreciate Davis’ presence more.

“He is just maturing as player and a young man.” Pospichal said after Peach Jam, coaching the same group of Titans since middle school. ”We had a tremendous group of young men. A tremendous unity of family, that team loved each other.”

Davis leads a loaded Wolves’ squad, including Titans’ teammates DJ Hogg (committed to Texas A&M), Mickey Mitchell (committed to Ohio State) and SoSo Jamabo (No. 1 RB in the country). Davis’ numbers are more than impressive, but he sees room for improvement in two key areas: leadership, and his athleticism.

Davis shoulders the leadership role with fellow senior DJ Hogg. They know expectations for Plano West are higher than ever. It’s tough having a target on your back, but it’s nothing he or his teammates hasn’t faced before.

“Pressure?” Davis asked, replying to the Wolves’ expectations. “Yeah, there’s pressure. But I’m comfortable. Rankings don’t matter to me. I’m playing to win. That is it. I am playing to win.”

Aside from putting an entire team on his back in search of a state title, Davis knows that the development of his athleticism and conditioning is instrumental to his success against SEC competition.

“Every scouting report I’ve ever read said that I’m not athletic enough,” Davis said with a laugh. “Since Peach Jam, my vertical has gone up five inches. I don’t consider myself a below the rim player anymore.

“My left hand development. I was watching some older Okafor videos, and he didn’t have a good left hand, but he does now. As good as he is, he realized he still needed to improve that. I’ve been getting more comfortable with my left.”

Davis is at the core of Texas A&M’s highest-ranked class of all time. Coach Pospichal was with Davis every step up of the way throughout his development and recruitment, and ended the interview with a glowing review.

“Everyone has setbacks in life,” Pospichal said. “There isn’t a person I know that doesn’t have problems. Whether it be his weight or him being ineligible. It’s how you deal with those certain situations. Tyler was put in a very difficult situation. It was unbelievably difficult for him and his family. He faced it with great courage, and found the willingness to get better. Does he play with a chip on his shoulder? Yes he does. There isn’t anything wrong with it. He plays the game with great passion and I love him for it. Tyler has found something in his life that has helped him become special.”

That he did, and he’s not stopping now.

“The ultimate goal is to go to the league.” Davis proclaimed.

“I’m working as hard as I can to make that dream come true.”