Amauri Hardy taking his new role in stride for The Family 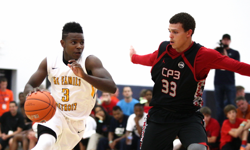 In the EYBL, you never know when your number is going to be called to step up for your squad.

The Family Detroit guard Amauri Hardy knows this better than anyone and he was given the task of filling the large shoes left behind by star Cassius Winston following an injury. Hardy, playing up, responded with outstanding play on both ends of the floor, averaging 8.0 points and 4.5 boards per game as The Family clinched a spot in Peach Jam.

The lightning-quick combo guard is just getting warmed up in his first year playing in the league, and is poised for a breakout junior season at Southfield (MI).

Nate Bucsko had a chance to talk to Hardy about his new role with The Family, what it will take to win Peach Jam, and how he hopes to take his game to the next level.

Nate Bucsko: How did the regular season go for you on a personal level and for your team, The Family Detroit?

Amauri Hardy: It was different for me personally because the simple fact that I was playing up with guys who aren't in my class meant that the competition would be a bit harder and would be a transition for me.

Our regular season didn't quite go as planned; we lost a few games we should've won despite the fact that we lost one of our best players (Cassius Winston) to an injury. That hurt us, but all that meant was that I had to step my play up and take advantage of the new starter role. We got some wins and I feel I did all I could for my team to get a spot in Peach Jam.

Nate Bucsko: What do you think helped you guys the most as you not only tried to replace Cassius but make a run at Peach Jam?

Amauri Hardy: We all came together as a team and decided that, despite his absence, we were not going to let that be an excuse. We just played winning basketball, which to me means playing for one another and just having fun.

Nate Bucsko: What's your favorite part of playing in the EYBL?

Amauri Hardy: Being able to play against great competition every game and play in front of numerous college coaches and scouts.

Amauri Hardy: The level of competition is definitely different from high school because every game you play is against guys that will some day go on to be pros and D-1 ball players.

Nate Bucsko: What's the one aspect of your game you feel has improved most in the League?

Amauri Hardy: I would like to say my feel for the game and my leadership, as well as the mental aspect of the game have gotten better for me.

Nate Bucsko: What's the one skill you still hope to improve most this summer?

Nate Bucsko: Being a younger player, did you feel any extra pressure to prove yourself or did you kind of let the older guys guide you?

Amauri Hardy: It was no pressure at all but every time I step on the court I always feel that I have something to prove. Since I play with Cassius and Miles (Bridges), I kind of pick and choose my spots and let the game come to me, because I don't need to force the issue.

Nate Bucsko: What's it like playing with Miles? How has he helped your game?

Amauri Hardy: Miles is an awesome guy to play with because he impacts the game tremendously on both ends of the floor. He is always playing hard and when I'm in the game he always encourages me to attack and keep a positive mind on the court. I also make sure I know where Miles is at all times on offense.

Nate Bucsko: What team do you most hope to face at Peach Jam?

Amauri Hardy: I hope to play the Las Vegas Prospects and Team Penny.

Nate Bucsko: What's something about you a lot of people don't know?

Amauri Hardy: That I have the ability to dunk on people but I never take advantage of the opportunity (Haha).

Nate Bucsko: Which player, college or pro, do you draw most of your game from?

Amauri Hardy: Mainly James Harden and I try to get a bit of Kyrie Irving in there.

Nate Bucsko: Favorite song to listen to before a game?

Amauri Hardy: 10 Bands by Drake and Preach by Young Dolph.

Nate Bucsko: Who's your biggest influence, on or off the court?

Amauri Hardy: God, my mom and my dad.

@TeamFinalEYBL @AtiveaG @NBA Copy/paste nailed us. He’s been added and was in the original list to begin with, just… https://t.co/SmgqVR11bU