Brady Manek is already committed to Oklahoma, and the 6-foot-8 swingman is about to showcase his skills for his hometown Nike EYBL affiliate.

Manek will run for Team Griffin in this weekend's opening EYBL session, and he will be a big contributor in a relatively unproven Team Griffin rotation.

Nate Buckso caught up with Manek, diving into a variety of topics about his basketball career.

Nate Bucsko: How did the season go?

Brady Manek: Team is No. 1 in Oklahoma, great draw in the playoffs so far, 20 points per game and 10 rebounds per game. Shooting the ball a lot better the last few games.

NB: What’s the biggest difference you have seen between AAU ball and winter high school hoops? Have you seen the benefits?

Manek: I played in adidas last year and playing AAU is much more physical and faster-paced. You really have to go hard the whole time. We play a few teams around our town, and the competition is much better in AAU and it’s much slower-paced in.

NB: This will be your first year on the EYBL circuit. What were some of the major reasons for joining a team with the League?

NB: Heading into the spring, what do you feel are your greatest strengths as a player? Is there a specific skill you want to focus on improving?

Manek: I am a legit 6-foot-8, almost 6-9, and I can shoot the ball well for my height. I am pretty athletic compared to other bigger forwards, which allows me to be versatile playing against smaller or bigger players. I want to improve my defense and moving laterally.

NB: Is there a player at the next level that you try and model your game after? Certain skills?

Manek: I probably would say Chandler Parsons is a good role model because he can shoot, post up and more.

NB: You have committed to play with Oklahoma already. What were the driving forces in that decision? Is that a program that has always been on your radar?

Manek: Lon Kruger is one of the best guys around, and the coaching staff and players are great. I live about 40 minutes away from ‘OU’ and have always been a Sooner fan. It really was a dream come true for me. 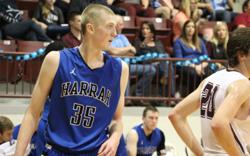 NB: You’ll be playing in the Big 12, which is known for its tough, physical play against conference foes. Do you feel that you will be ready for that style of play by the time your freshman season rolls around?

Manek: I think any college you go to is going to have physical guys and you really have to be prepared to take that next step. I still have one and a half full seasons before I play there. I’m still growing, and I am hoping I’ll be able to develop.

NB: When you aren’t on the court of working on your game, what are you doing?

Manek: I play video games all the time (COD guy), I have a lake house and go fishing all the time, watch a lot of TV (The Office). Besides that, I spend my time at the gym or in front of the TV

NB: Who is your biggest supporter? Inspiration?

Manek: Parents are biggest supporters, and my dad is my biggest inspiration, he played ball as well.

NB: What’s one thing most people would be surprised to know about you?

Manek: If someone looked at me, they wouldn’t think I would be athletic, but I like to think I’m pretty athletic.

NB: Any team or player you are looking most forward to facing on the Circuit?

Manek: I would like to play against MOKAN. Trae is in Norman and I grew up playing against him. Him and Porter are really good.