In 2015, Kevin Knox took a backseat his elders.

That tends to happen when you're running alongside Jonathan Isaac and Tony Bradley, and Knox was totally comfortable learning from his teammates.

In 2016, he'll be doing the teaching. And if it goes the way he wants, he may be calling himself the Most Valuable Player of the best grassroots circuit in the world.

Knox is in for a gigantic 2016, and D1's Nate Buscko caught up with the Tampa Catholic (Florida) junior, who gave a tremendous interview.

Read below to learn more about the E1T1 star.

Nate Bucsko: What were some of the highlights for you from this past winter in high school ball?

NB: Take me through that moment. What was going through your head before and during that play? Must have been a ton of adrenaline.

Knox: That game, I wasn’t having my best game and they had a great strategy for defending me. I think I had my season-low that game. I actually scored 7 straight to tie it, then we called a timeout after a steal with 12 seconds left. Coach told me to just get the ball and go because if I missed I could still have another shot.

I remember looking up at the stands hoping I make the shot. I actually missed the initial shot and then I grabbed my own rebound. Everyone heard the slap on the way up and I thought there might be a foul call but I actually made it through the contact, and the fans and my teammates just went crazy.

NB: Is there a part of your game that you really strived to improve on this season and that you’re excited to show off?

Knox: Last year, playing with Tony (Bradley), Jonathan (Isaac), and everyone my role was really to bring energy, grab rebounds, and play big. This year though, I am going to be handling the ball a lot more and will be playing more guard. I worked hard on my ballhandling and shooting all summer last year and I am excited to show how much I’ve improved this year.

NB: What types of things were you doing to improve those aspects of your game?

Knox: I think I really have an all-around game. When I have a big on me I can take him out to the perimeter, and then when I have a smaller player on me I can post him up and play big. That being said, I have worked a lot on my ballhandling and my perimeter shooting.

Defense is what a lot of coaches want to see in the EYBL and guys really step it up every game. You really need to be able to handle the ball and then create your own shot, so I am ready to go out and prove myself.

NB: As you said before your role has changed quite a bit from last year. Without Tony and Jonathan around, do you feel like this is your team now?

Knox: The offense ran through Jonathan and Tony last year, but this year I really think a lot is on my shoulders and I am ready to step into bigger shoes. We are one big family and my teammates are depending on me to lead us.

NB: Any certain players or teams you’re really hoping to get a shot at this season?

Knox: Everyone I played with on USA basketball, you always look forward to playing against your friends. But really, anyone I face I am hoping to go out and dominate them. It can be all fun and games after the game, but you have to bring that aggressive mindset and take care of business. 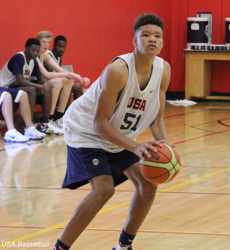 NB: What are some goals you have set for yourself, and for E1T1 this season?

Knox: I would like to average a double-double, getting more than 20 and 10 I think is a good challenge for me.

NB: Was there a moment or time in your life when basketball went from being just another sport for you, and you realized it could open some doors for you?

Knox: I started playing ball when I was 3 or 4 and I usually played with kids who are more competitive and older. I played both football and basketball until sophomore year and then my recruitment really picked up in basketball and I kind of realized that my future was going to be with basketball. Unfortunately that meant I had to quit football but it has been worth it.

NB: What position did you play on the gridiron?

Knox: I was the starting quarterback.

NB: Is there a pregame ritual you follow before big games?

Knox: I jam out before games on my Beats and really just zone out everything else around me. Every game in the EYBL is big so the music really helps me focus on what I need to do.

NB: What are you looking for in a program at the next level?

Knox: Being able to go there and be comfortable, and my parents need to be able to trust the coaches and know that I’ll be safe. I really think that the coaches that really care and make the effort to keep up with how I’m doing build trust.

NB: Which players have molded or influenced your game the most?

Knox: A lot of people have told me I play like Kevin Durant and Giannis Antetokounmpo because I’m able to be long and shoot and just kind of have a versatile game. I have been watching their movements and how they play both with and without the ball. Those two I really compare my game to.

NB: What’s something people would be surprised to learn about you?

Knox: A lot of people think I’m really outgoing and loud but I am actually very quiet and really only talk to my friends. I also played baseball when I was younger.

Knox: I love alfredo pasta with chicken before games.

NB: Who’s your biggest influence on and off the court?

Knox: My dad always pushed me to be the best can be. He always would be there no matter what and I look up to him because he knows what it takes to get to the next level.

NB: What’s one message you have for coaches and fans about your game?

Knox: I am not someone who’s going to scream and yell at teammates or show a ton of emotion when I play, but I go out and do whatever it takes to win. I put my head down and play my game the best I can.