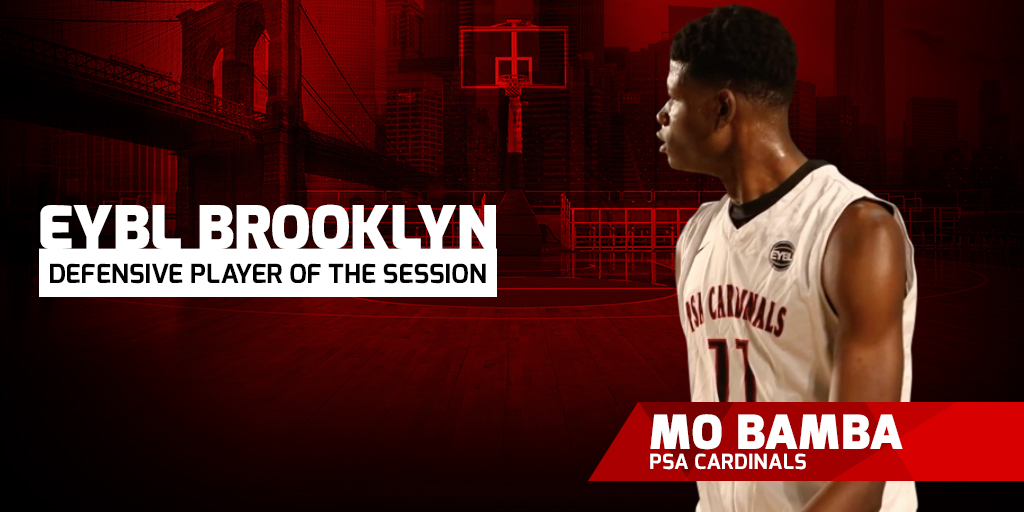 The PSA Cardinals’ star big man earned him a spot on our First Team All-Brooklyn, and a big reason why was his defensive presence all weekend. Bamba made his eagerly-anticipated 17U debut in New York, and he proceeded to turn heads and drop jaws.

The 7-foot junior made his presence felt immediately against California Supreme, battling fellow 2017 star 7-foot big men DeAndre Ayton and Brandon McCoy in the EYBL opener. The matchup was aired on ESPN, so the pressure was on for Bamba and his PSA Cardinals.

He proceeded to rack up two blocks, two steals and countless shot alterations without committing a foul, while grabbing 12 overall rebounds. Bamba backed up that performance with two straight 4-block games, while tallying an EYBL-high 32 defensive rebounds.

"(Mo) makes my job easy and simple," PSA Cardinals point guard Quade Green said. " He's more (than just defense). He can do everything."

Green isn't lying. The most impressive aspect of Bamba’s game is his ability to defend without fouling. The Westtown (Pennsylvania) product only committed four fouls in three games, giving him a better than 2-to-1 block to foul ratio through the first session.

Bamba is the next in a growing list of dominant defenders for the PSA Cardinals' program, who are responsible for Cheick Diallo & Kassoum Yakwe - the last two winners of EYBL Defensive Player of the Year.

"Our defensive identity all comes with a concept that it allows the players to control their destiny while being able to play with one another," PSA Cardinals Director Terrance 'Munch' Williams explained. "The rule at PSA is, any time a stop is gotten via the rebound, block shot, steal, etc, they are allowed to push the ball and make a play with your teammates.

The tune changes if they falter on defense.

"If we are scored on, a play or set will be called by the sideline," Williams continued. "With that being said, most players in AAU like to play freely. Thus, it forces the team to take ownership of their defense."

Bamba has bought into that mentality, and has shown that a Defensive POY three-peat is possible for the disciplined & focused PSA Cardinals' program.