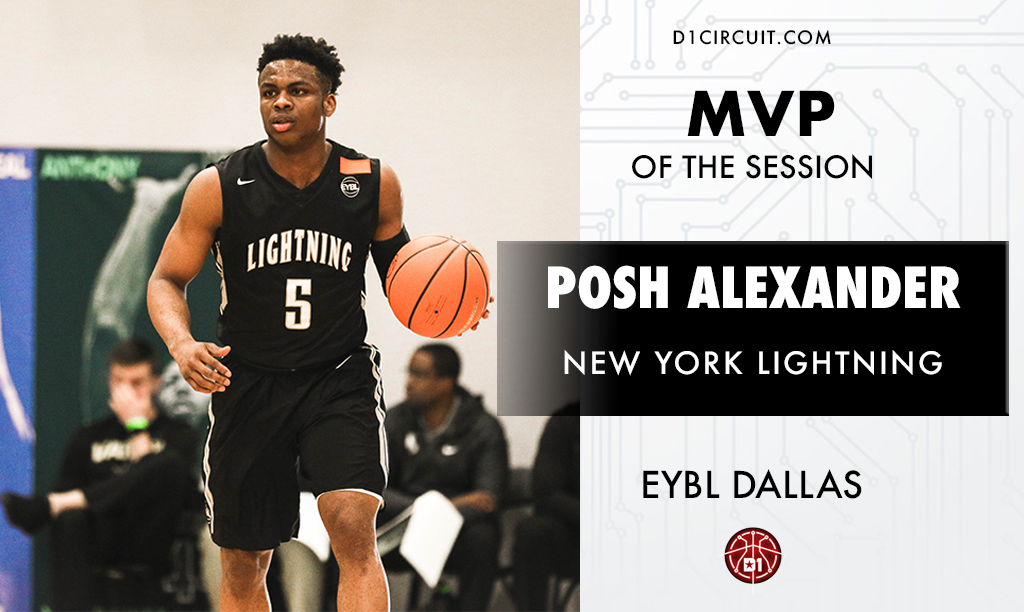 Posh Alexander entered NIKE EYBL Dallas with something to prove.

Four games later, and it's safe to say he accomplished his mission.

The New York Lightning floor general dazzled on the court all weekend, showcasing his wide array of skills while leading his team to four huge wins. Alexander averaged 16.5 points while shooting a blistering 67.6 percent from the field. He racked up 24 assists (6.0 APG) while averaging 2.8 rebounds and 2.2 steals. The key ingredient to Alexander's success?

“I just wanted to prove to people that I’m one of the top guards in the country,” said Alexander. “By me believing that, I went out and performed the best I can.”

The first win of the session was the most surprising, as hardly anyone expected the Lightning to take out the loaded Bluff City Legends. The Lightning led the game from start to finish, putting up a ridiculous 97 points while imposing their will on Bluff City. The Lightning played their style of basketball - fast and aggressive - and Bluff City wasn't able to match their intensity.

“It feels great because a lot of people expected us to lose,” Alexander said. “We all came out and played hard, which is why we got the wins."

Alexander wasn't the only one cooking. Junior Dashawn Davis and Alejandro Vasquez played terrifically alongside Alexander, and the 6-foot sophomore realizes the importance of his supporting cast.

“It’s like a family here and we are all brothers,” Alexander explained.

The Lightning took out Seattle Rotary, Rose City Rebels and CIA Bounce to finish their strong opening session. Behind Alexander, the Lightning put up a league-high 86 points per game.

The next four-game session is huge for the Lightning, as the script will flip. Alexander and the Lightning will no longer be the underdog. Instead, they will have a target on their backs - a challenge that Alexander is prepared to tackle with his team.

"We have a lot of love for each other," Alexander said. "The love we have for our teammates is strong over here.”

Alexander and company are playing some amazing basketball, and will be ranked in the initial D1 Power Rankings before Indianapolis.

Ultimately, the first session was a huge success for Alexander and the Lightning. But they aren't resting on their laurels. Sure, there will be a time for celebration, but not when Indy is right around the corner. The Lightning mindset? Win and move on.

"We got the wins," Alexander said.

"Now we are just getting ready for the next session.”