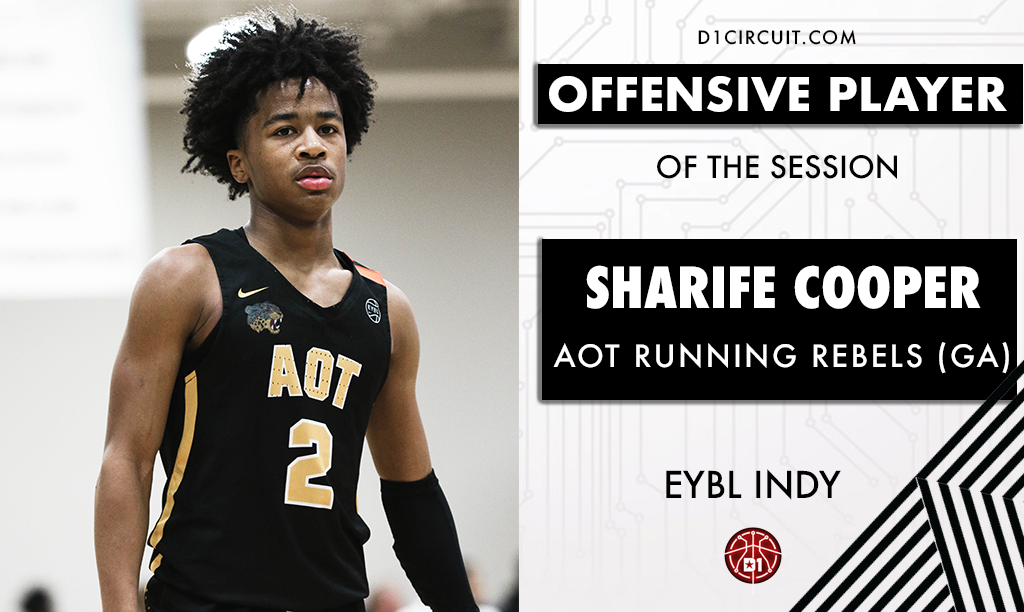 AOT made their EYBL program debut last week in Dallas, finishing with with a 3-1 record. They followed it up with another 3-1 showing in Indianapolis.

How have they been so successful in their EYBL kickoff? Two reasons.

One reason, is they have a deep, talented unit that has been playing together for a long time.

The second, is Sharife Cooper. Plain and simple.

The AOT floor general was clicking on all cylinders in Indianapolis, averaging 22.5 points and 7.3 assists per game. Counting points and assists, Cooper accounted for roughly 47 percent of AOT's total offense in session two.

Not only was Cooper terrific offensively, but he did it without turning the ball over. Cooper operated with a 2.8 assist-to-turnover ratio, tops in Indianapolis.

Cooper dropped 25 points and 12 assists against the 6th-ranked Pro Skills, directing AOT to a hard-fought win while remaining poised for all 32 minutes. In AOT's overtime loss to the Houston Hoops - their only defeat of the session - Cooper didn't go down without a fight. Playing all 36 minutes, Cooper put up 29 points, five assists and four rebounds, going tit-for-tat with Hoops' star Tyrese Maxey.

Cooper is having a terrific sophomore campaign, and has a chance to put together one of the best seasons for a true point guard in recent EYBL history. The 6-foot-1 Cooper is dynamic with the ball in his hands, and isn't one to shy away from the big moment.

With fellow elite recruits like Isaac Okoro, BJ Boston and Charles Smith IV running by his side, Cooper will continue to feed some of the best running mates on the circuit.