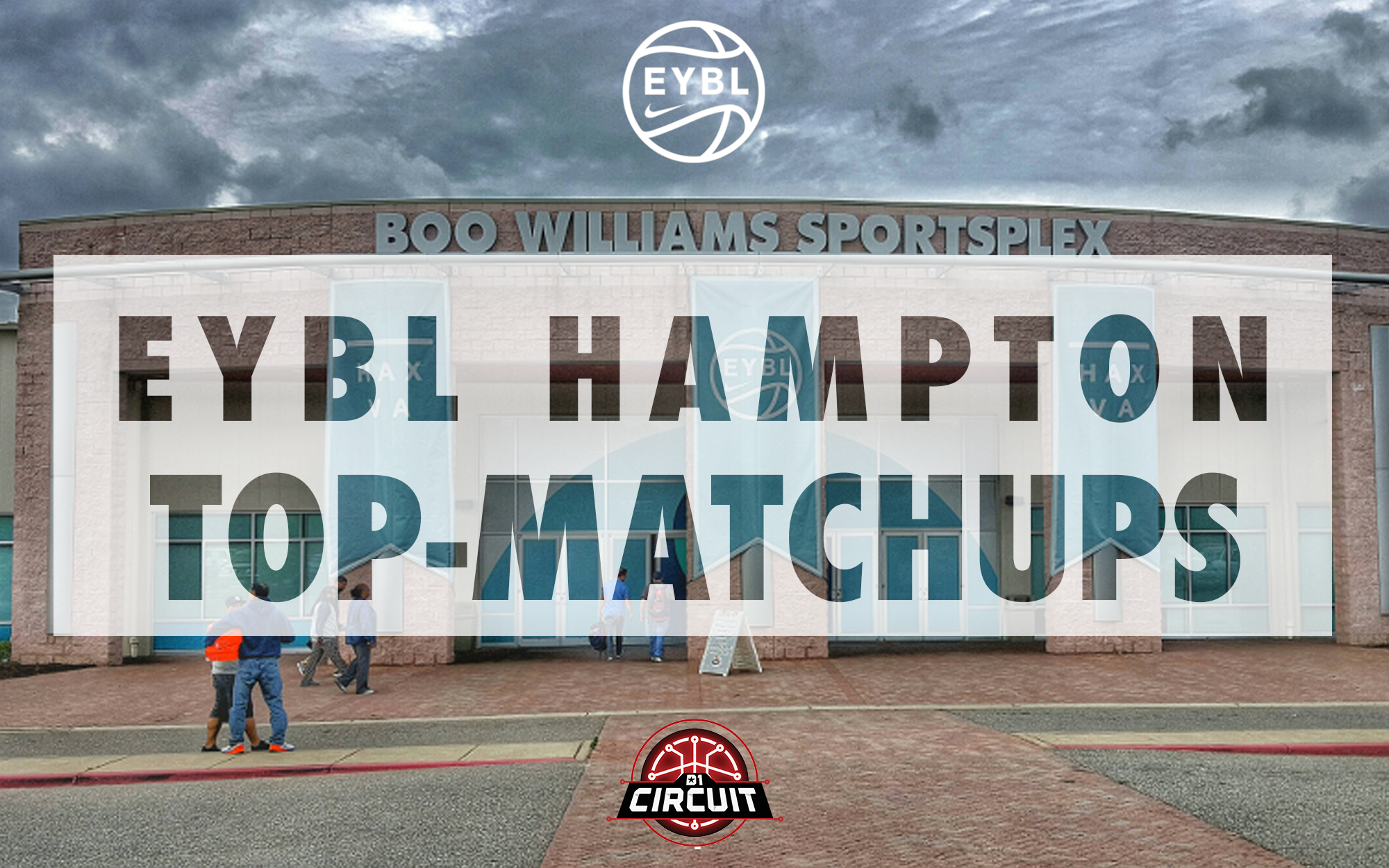 The final EYBL session is here, and it's shaping up to be one of the most competitive sessions in league history.

Over two days, 29 teams will play four games each, competing for 18 remaining Peach Jam bids. Team Takeover, AOT, Houston Hoops, Team CP3, Drive Nation and City Rocks have all clinched their bids, while eight teams have 8-4 records, one win away from a bid.

Eight games will be in play at once in Hampton, meaning there will be some tough games to choose between. The final session is almost primarily divisional play, so teams will be clinching and dropping like flies simultaneously.

Read below for a detailed breakdown of the weekend's top matchups.

Keion Brooks faces off against Wendell Moore in a battle of elite swingmen. The Indy Heat will be in with a win, but CP3 will not be an easy out, as they are competing for seeding. Expect Trayce Jackson-Davis to be a difference-maker here.

Isaiah Stewart (Rocks) vs. James Wiseman (BCL) is one of the best individual matchups of the entire session. The Rocks have clinched, but will be seeking a signature win to close out their season. Bluff City needs a couple wins to secure their spot, but figure to have a strong at-large resume if they fall short against the Rocks.

The battle for New York is a must-win for the Renaissance, who find themselves in a win-or-go-home mentality after struggling in Atlanta. They have more than enough talent to compete with the league's best, and will need to come out hot against a rock-solid Lightning squad.

The Cardinals (7-5) are in a decent spot to secure a Peach Jam bid, and a session-opening win over the LV Prospects, a fellow bubble-dweller, would go a long ways. Cole Anthony faces off against the Prospects' Josh Christopher, Jaden Hardy and Jaelen House, and they'll need to keep the elite point guard in check if they want to escape with a victory.

Tyrese Maxey takes his red-hot Hoops' squad against Malik Hall, N'Faly Dante and MOKAN Elite. The Hoops have been rolling since MVP Candidate Maxey joined the fray, and they have their sites set on Peach Jam gold. MOKAN always plays their best basketball at the end of the year, meaning this should be an extremely high-level matchup between ranked foes.

AOT (10-2) has clinched their bid, while the Soldiers (8-4) are likely one win away. The matchups between Sharife Cooper and Scotty Pippen should be fun, while KJ Martin and Christian Koloko will battle MVP-candidate Isaac Okoro and Babatunde Akingbola. There will be a ton of talent on the floor in Saturday afternoon's affair.

Simply put, both teams desperately need a win here. Both sit at 5-7, and both need at least 3 wins to have a chance at Peach Jam. Kahlil Whitney has been dynamic for the Fire, and he'll be contested by United wings Juwan Gary and Patrick Williams.

Jaden McDaniels has been outrageously good through 12 EYBL games, and he'll face a big test in James Wiseman, Malcolm Dandridge, DJ Jeffries and Chandler Lawson of the Legends. This has 'game of the session' written all over it, and the winner will be Peach Jam bound.

New York battles New Jersey in a battle of bubble teams, as Cole Anthony faces off against the Playaz backcourt duo of Al-Amir Dawes and Khalif Battle. The Playaz are red-hot after a perfect Atlanta session, and will be focused on slowing Anthony down. Look out for PSA's Akok Akok battling the Playaz underrated big man Zach Freemantle.

Two ranked squads battle on Saturday evening, pitting MVP candidates Tyrese Maxey (Hoops) and Keion Brooks (Heat) against one another. This will be a major battle of styles, as the Hoops rely on their guards, while the Heat depend on their frontcourt productivity.

Boo Williams (6-6) will be defending home court for the weekend, and will likely need a 3-1 showing in order to clinch a bid. MeanStreets is in the exact same situation, meaning this matchup should be highly-competitive. Cam Thomas (Boo) and Brandon Newman (MeanStreets) are two of the best scorers in the EYBL, and should put up major numbers on Saturday night.

NTF (6-6) squares off against the Mac Irvin Fire (5-7) in a must-win for both squads. NTF has battled injuries throughout the spring, and will be depending on Vernon Carey's production against a undersized Fire frontcourt. Kahlil Whitney is a matchup nightmare for basically anyone, and will need to play big against NTF.

Isaiah Stewart will have his hands full against BBE's Francis Okoro and EJ Liddell, who will need a W if they fail to do so on Saturday. This game will be important in terms of seeding, and the Rocks will likely need a big offensive performance from Joe Girard against a loaded BBE backcourt.

Seattle Rotary has a chance to pick up a signature win over Woodz Elite, and they will need a win if they struggle on Saturday. Woodz Elite (8-4) comes at you in waves, and their depth is something Rotary is going to have to overcome. Jaden McDaniels could very well be the difference in this matchup, as Woodz is still without their star big man Jason Jitoboh (ankle).

The Stars likely need to go 4-0 in Hampton to secure a bid, and they'll have their hands full against Keion Brooks, Trayce Jackson-Davis and the Indy Heat. Brooks' matchup versus the Stars' Trendon Watford is worth the price of admission.

10 top-100 players will be competing in this matchup, highlighted by a sophomore point guard tussle between Sharife Cooper (AOT) and Noah Farrakhan (NTF). There are too many high-level palyers to write about, making this game a must-see for Hampton-bound fans.

The Rocks and MOKAN will close their EYBL regular season with a bang. Two top 10 big men will square off, as Isaiah Stewart (Rocks) and N'Faly Dante (MOKAN) should have an awesome battle on the interior. This game will likely matter for seeding, but could ultimately feature two clinched-teams resting their players.

MeanStreets has enough Indiana-bred talent on their roster to make this a nice border battle, and the 'Streets need a win a lot more than their cross-state rival. Brandon Newman and Armaan Franklin will need to light it up if head coach Tyrone Slaughter and company expect to pick up a win.

Tyrese Maxey, De'Vion Harmon and Chris Harris square off against the Soldiers' backcourt trio of Scotty Pippen Jr, Boogie Ellis and Gianni Hunt. The Soldiers' will have the size advantage inside, and will need to limit Maxey's production if they want to leave victorious.

The Renaissance are in a must-win situation, while the Playaz need at least two wins in Hampton to feel good about their Peach Jam chances. Jalen Lecque will go head-to-head with the Playaz' Al-Amir Dawes and Khalif Battle in an elite backcourt battle. Zach Freemantle will need to play better than ever against a massive Rens' frontcourt.

Matchup of the Session

Two top five squads square off in the Matchup of the Session, and we just hope neither squads decide to rest their players. Why? Because these are two of the most talented teams in the league, and it would be a great glimpse of a future Peach Jam battle. Both teams loves to play fast, making this a prime candidate to be the highest scoring game of the final session.

The session concludes with host Boo Williams looking for a signature win over Nike Team Florida. Cam Thomas is going to have to score in bunches for Boo, who will have matchup issues with NTF's Vernon Carey, Scott Barnes and DeAntoni Gordon. If Boo wins this, they should be in terrific shape for a Peach Jam bid.