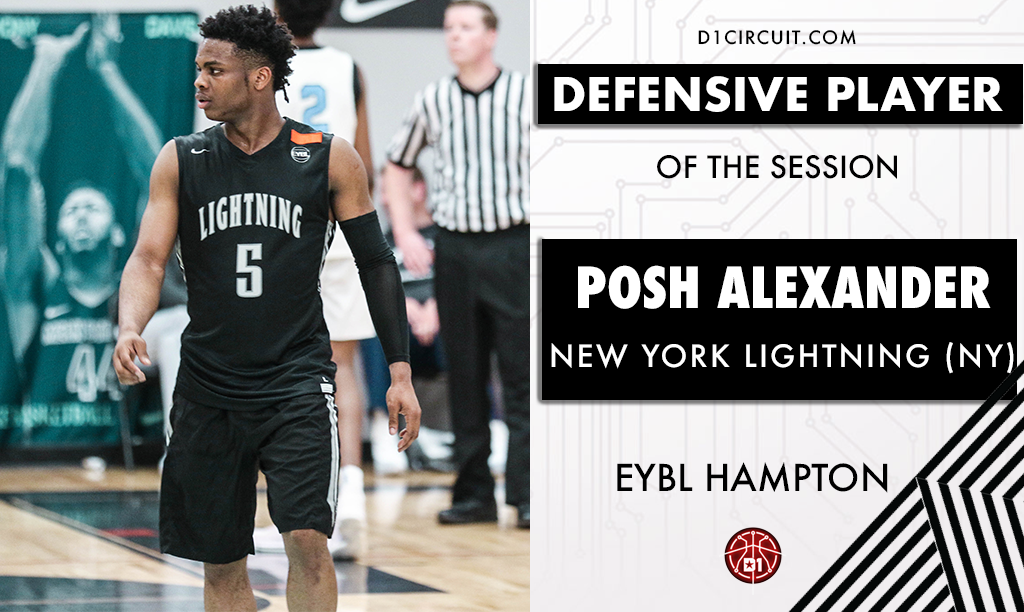 Posh Alexander made a statement in the final session of the EYBL season, putting together one of the most impressive four-game defensive stretches of the season.

The 6-foot-2 guard carries the reputation of being tough as nails, which makes sense as Alexander hails from New York City. He combines that toughness with a strong, muscular frame to form an all-around game that's mature beyond his years.

In Hampton, it was the defensive side of his game that shined brightest.

In the session opener, Alexander tallied five steals while locking down a deep and talented Renaissance backcourt. Alexander followed that up with a tremendous personal showing in a loss against No. 1 Team Takeover, going toe-to-toe with the nation's deepest backcourt. Alexander grabbed three more steals against TTO, also contributing 23 points, four rebounds and two assists.

Alexander's responsibility to score and lead the Lightning on enhances the impressiveness of his defense. The sophomore guard is constantly applying pressure, is able to lock down without fouling; Alexander committed 1.8 fouls per game in Hampton. He simply does not get tired, and he's never outworked.

The Our Saviour Lutheran (NY) product finished the session with three more steals in a win over Team Melo, bringing his per-game steal total up to 3.3 for the session. Almost more impressive for Alexander is a defensive statistic that is rarely ever looked at, but recorded upon film-breakdown: deflections

Alexander averaged 5.7 deflections per game in Hampton, three more than the closest competitor. So while he may not get every steal, this proves that Alexander is on another level when it comes to applying defensive pressure and intensity.

Alexander is a terrific defender, but it's important to note that his teammates share the exact same defensive mindset as their leader.  DaShawn Davis and Jordan Dingle are both plus-defenders, while their frontcourt is primarily relied upon for their defensive production.

Alexander and the Lightning just finished up a 10-6 regular season, and will be heading to the 2018 Peach Jam. With their leader healthy and hungry, his defense and leadership will be a certain headache for everyone in their pool.