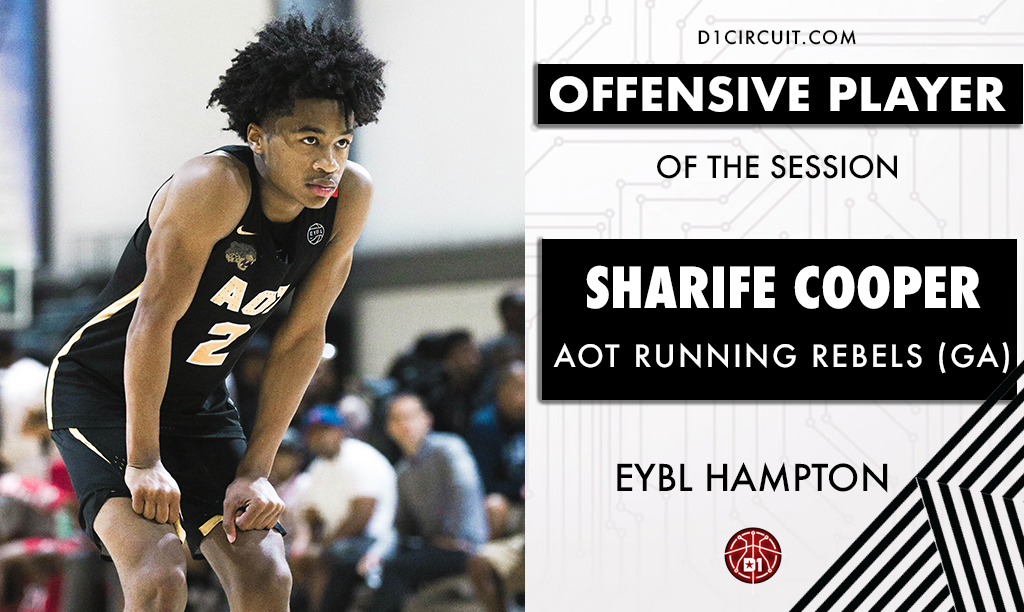 Every once and a while, an underclassmen comes along and takes the league by storm.

It happened in 2015 as Gary Trent led the EYBL in scoring as a sophomore. It happened last year, when Cole Antony took home Defensive Player of the Year as an underclassmen.

Several freshman have stood out on the circuit this spring, but one statement can be made with confidence:

No one has outplayed Sharife Cooper offensively.

Cooper closed out the session with 10 assists against Drive Nation, adding to the dimes he dropped in the first three contests. The 6-foot-2 Cooper averaged 7.5 assists for the session, accounting for roughly 42 points per game in Hampton.

Cooper gets help from Isaac Okoro, Brandon Boston and the rest of the AOT Running Rebels, and watching them operate on offense is must-see basketball. Cooper is electric with the ball in his hands, and since the AOAT rotation plays together year-round, he employs a confidence and playmaking ability rarely seen in the EYBL by a player his age. AOT loves to run the floor, and no one is better than Cooper at getting them easy baskets.

Cooper is currently ranked in the top 100 by most recruiting outlets, but if you think there are 20 players in the 2020 class with more upside than AOT's floor general, we have some ocean front property in Idaho to sell you.

AOT is likely to get a top-four seed at Peach Jam, and they are one of the handful of teams that has the chance of knocking off No. 1 Team Takeover.

With Cooper at the helm and his running mates healthy, AOT will be a Peach Jam favorite, and will have a chance to finish off the best inaugural season in EYBL history.

Check out Cooper's full stats below, followed by a video recap by our friends at Hoop Diamonds.