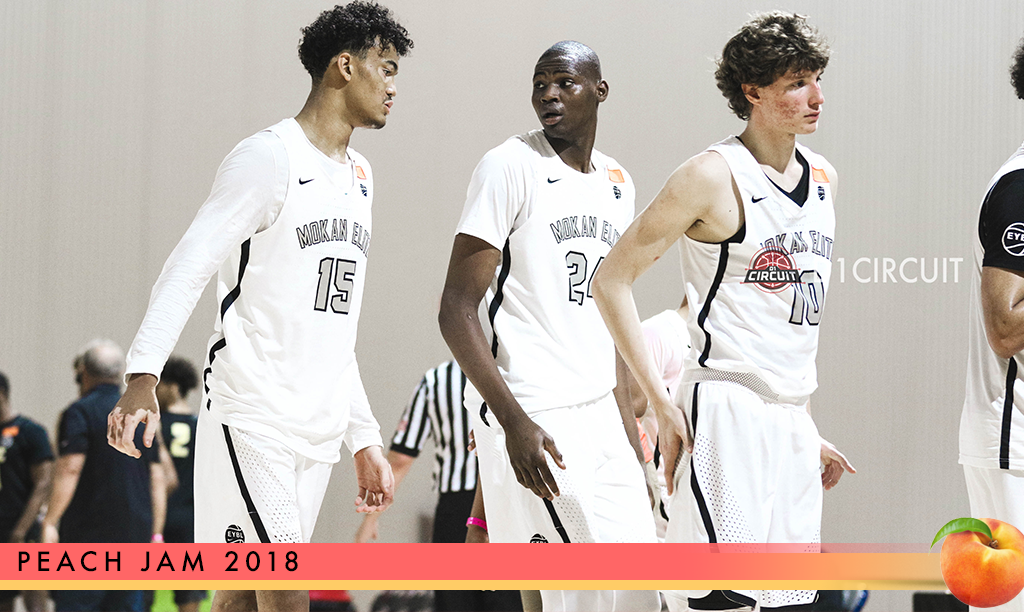 MOKAN Elite won Division A outright, finishing with a 12-4 record behind one of the more impressive overall resumes on the circuit. MOKAN started the season with a 44-point drubbing over the Playaz - a Peach Jam qualifier, and finished their spring campaign with a 4-0 showing in Hampton. They’re gave Team Takeover their toughest game of the season in a 2-point overtime defeat, and racked up a 7-3 record against Peach Jam competition. Head coach Chris Neff has a roster loaded with Division 1 talent, including lone veteran returner Malik Hall. Neff’s rotation runs 10 deep, including the mid-season addition of point guard Grant Sherfield. There are only a couple of teams on the circuit that can compete with MOKAN’s overall makeup. They struggled in last year’s Peach Jam, and will be looking to make some massive noise after taking the championship in 2016.

Hall is the star of the group, coupling his evolving talents with the most experience of anyone on the roster. Hall started slow, averaging 10 points per game in the opening session while adjusting to his newfound role as ‘the guy’. Hall’s haziness only lasted a session, as the 6-foot-7 swingman scored in double-figures in MOKAN’s remaining 12 game while averaging 16 points per contest. Hall also chipped in per-game averages of 4.7 rebounds and 2.4 assists, and his versatility will come in very handy for Neff and company in mid-July. Hall has big expectations for Peach Jam, and he likes their chances.

“I think we have a chance to do something special this year, so I’m looking forward to the competition and competing with my brothers.”

MOKAN features seven guards on their roster, most of any team at Peach Jam. Sherfield (247 Composite No. 63) is verbally-committed to UCLA, and after seeing him run the back half of the circuit, it’s easy to see why. The 6-foot-2 point guard averaged 11.1 points, 3.4 rebounds and 2.4 assists per game, anuickness, d should only improve his productivity as he gets more comfortable in MOKAN’s lineup. Junior Dajuan Harris was terrific during the regular season, operating as one of the most underrated guards in the country. The 6-foot-1 Rock Bridge (MO) product averaged 5.7 assists per game - the second most on the circuit - including seven games with six assists or more. Harris (247 3-star) has elite qfloor vision and defensive skills, evidenced by his 2.1 steals per game average - good for fifth in the EYBL. Simply put, not many players impact a game without scoring the ball as much as Harris. 6-foot-5 junior Isiaih Mosley adds another playmaker for MOKAN, fresh off regular season averages of 11.1 points and 3.7 rebounds. 5-foot-11 DeAndre Sorrells (6.1 PPG, 1.4 APG, 38.2 3PT%) and 6-foot-4 Christian Braun (6.9 PPG, 4.0 RPG, 38.5 3PT%) are the two best perimeter shooters on the roster, and both will see major minutes in July. Juniors Javaunte Hawkins and Carlos Paez round out the rotation, with the former being a legitimate threat from the perimeter.

Hall leads a five-man rotation for MOKAN, and he won’t leave the court often. N’Faly Dante (247 No. 6) mans the middle, and the 7-foot sophomore enjoyed a terrific regular season. Gifted with elite length and athleticism, Dante averaged 13.1 points, 9.0 rebounds and 1.6 blocks in 16 regular season games. Dante shot 64% from the floor on 144 shots and grabbed 108 defensive rebounds - third most on the circuit. Antonio Gordon (5.8 PPG, 2.2 RPG) proved to be impactful during limited action, while juniors Jarrett Hensley and Roman Wilson each see a handful of minutes. Mosley and Braun will certainly see time at the small forward position when MOKAN goes small, but the bread and butter of MOKAN’s frontcourt is Hall and Dante.

There’s a lot to like about MOKAN. They’re deep, talented, well-coached and extremely hungry after last year’s Peach Jam performance. Most importantly, they’re efficient on both ends; MOKAN shot 49% from the floor as a team while holding their opponent under 60 points in seven games. They don’t have a noticeable weakness across their rotation, and if Hall and Dante can stay out of foul trouble, anything short of bracket play would be considered a massive disappointment. Director Matt Suther has this program humming, and quite frankly, they’re used to having a target on their back. Considering they’re already 3-0 against their pool in the regular season, MOKAN is the odds on favorite to take Pool C.