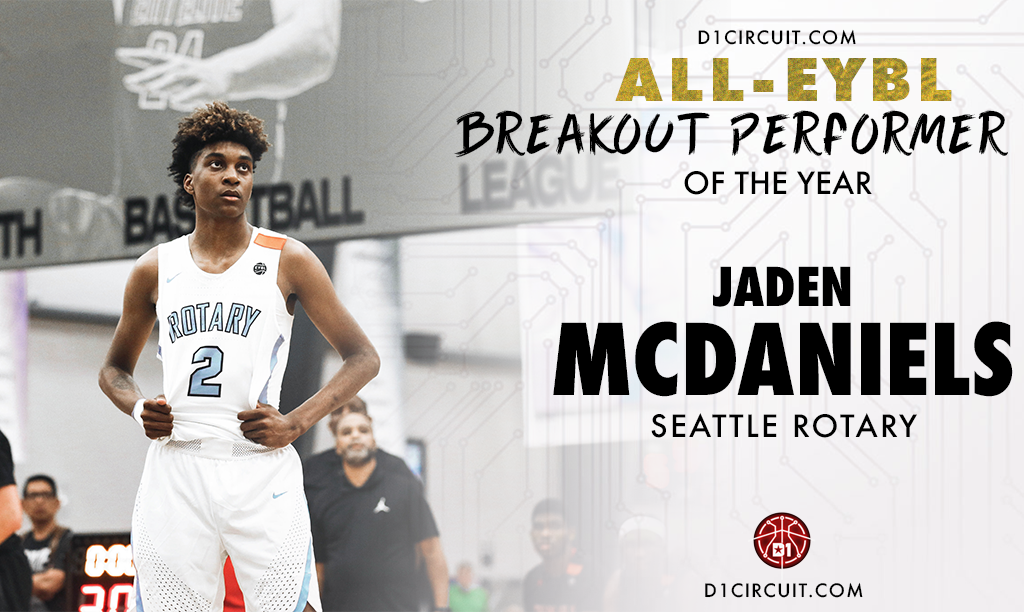 Jaden McDaniels is a top five player in the country.

He may even be the best.

If that proclamation was made three months ago, it would have been met by some pretty heavy backlash.

After 16 games in the NIKE EYBL, you’d now be foolish for thinking any different.

McDaniels put up a season to remember this spring, catapulting himself into the conversation for best player in the 2019 graduating class while helping Seattle Rotary Style to their first Peach Jam bid since 2012.

Was the EYBL everything it’s cracked up to be? McDaniels was matter-of-fact.

“Yeah, everything I heard, they weren’t lying.” McDaniels admitted. “It’s the best place to play. The toughest part was getting a feel of playing good players every day.”

The 6-foot-10 swingman - and swingman is emphasized due to the backlash we saw after calling him a big man earlier this season- can do a bit of everything on the court.

In 10 wins and six losses, McDaniels averaged 19.2 points, 9.3 rebounds, 1.9 assists and 1.4 blocks. As confident as he is, the success even caught McDaniels by surprise.

“Coming into the EYBL, I wanted to show everyone that I’m a top player in the country,” McDaniels said. “I didn’t expect to rise this high, but I’ve always thought about being where I’m at right now.”

In the state of Washington, he was a known commodity at the high school level. How fast would he rise to national prominence?

“Most in our area knew that he had an awful lot of potential,” Rotary Director Daryll Hennings said. “We just didn't know that it would show up quite this rapidly.”

McDaniels is much more than a big man, employing guard-like skills and an evolving mid-range and perimeter jump shot. His older brother Jalen plays for San Diego State, and he comes from a very close-knit family.

“I'm really happy for him and his family,” Hennings said. “He's a great young man from a wonderful family.”

When McDaniels decided to join Rotary for his final grassroots go-round, Hennings knew he could be special. He turned out to be historic.

“I'm honored to say that he is a Seattle Rotary veteran, as he has played in our program for numerous years.” Hennings said. “Needless to say, he has helped our team accomplish some pretty incredible things this spring and we will be supporting him in whatever he decides to do.”

Hennings final statement about McDaniels is something we can all agree upon.

“I think I'm safe in saying,” Hennings said. “There is more to come, no doubt.”

McDaniels will get to write that story, and his thoughts on his immediate future were crystal clear when asked what he’s looking forward to in July.

“I’m looking forward to playing as many games as it takes to get to the Championship.”