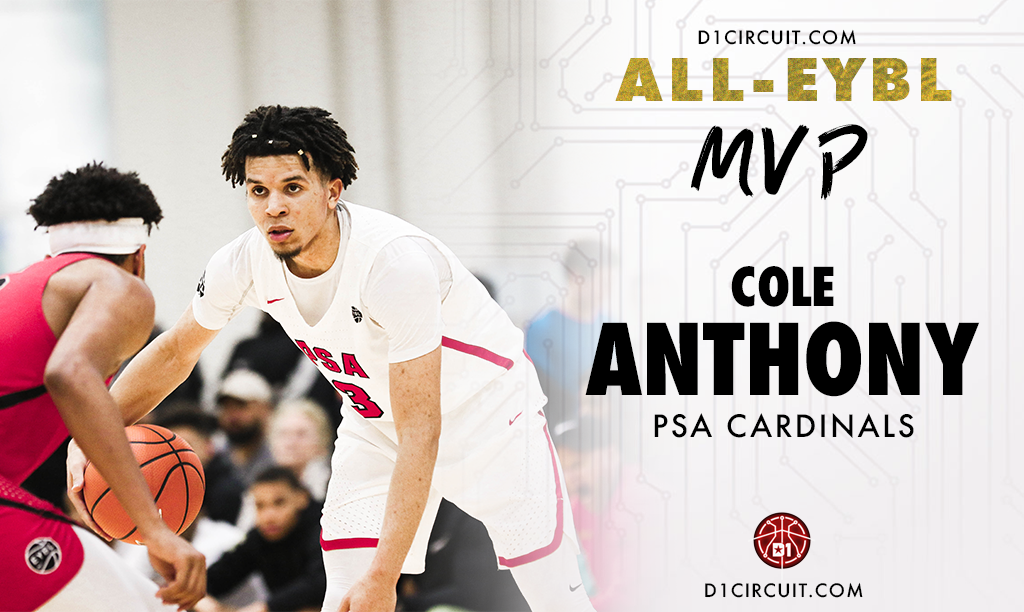 The previous phrase has been the PSA Cardinals’ mantra for the past few seasons. Their coaching staff uses it frequently, and it means a few things according to the different coaches from PSA.

Take your future into your own hands.

Do whatever is necessary to better yourself and don’t make excuses.

Hold yourself accountable for the greater good.

Demand the best out of yourself and everyone around you.

Three NIKE EYBL seasons later, and the PSA coaching staff is certain about one thing.

No one has owned their destiny like Cole Anthony.

The 6-foot-3 point guard obliterated the competition this spring, putting up per-game averages of  26.9 points, 7.6 rebounds, 3.5 assists and 1.4 steals over 16 contests. He was in attack-mode from the jump consistently slicing and dicing his way through EYBL defenses.

He didn’t just own his destiny, he completely owned the EYBL.

“It’s been wonderful to watch.” Greg Anthony said, Cole’s father and 14-year NBA veteran. “He’s so early in his journey. At this point, he’s doing a good of job as he can do. He played really well this spring, and there’s room for improvement.”

One look at Anthony, and it’s clear he’s separated himself from the proverbial pack. His stats back it up.

Anthony led the league in scoring and was the best rebounder of any player shorter than 6-foot-5. He shot 89% from the stripe, attempting 46 more free throws than the next closest competitor. His quick first step and aggressive style-of-play allowed him to lead the league in fouls drawn.

To put it bluntly, Anthony can do a bit of everything on a basketball court. His physical abilities are off the charts, but it’s everything else that makes him special.

He’s spent over three years with the PSA Cardinals’ program, and one thing is clear after speaking with the coaching staff: Cole Anthony understands the bigger picture.

Cole Anthony has set a bar for excellence and leadership that has exceeded anything we could have expected.

“Cole Anthony has set a bar for excellence and leadership that has exceeded anything we could have expected,” PSA Cardinals assistant coach Andre Charles said. “He has continuously challenged himself to be better not just as a player, but as a student, a son, a brother, and a friend.  We have always taken a holistic approach to our development process and Cole is a shining example of what is possible when students and families trust and support that process.”

“Cole has taken complete ownership of his destiny and he has grasped that the key to that is demanding the best out of yourself and everyone around you.”

“(Cole) has held every guy in the program accountable for giving 110 percent every time they step on the court with the Cardinals across their chest,” Green said.

Anthony is set to cap off his NIKE EYBL next week, and it will be bittersweet for everyone involved when it comes to an end. Terrance ‘Munch’ Williams, Director and Head Coach of the PSA Cardinals, loves his point guard. Anthony has had a profound impact on Williams’ program, and his point guard has come a long way since his freshman campaign.

“When the marriage was created between Cole Anthony and the PSA Cardinals, I gave his family and my staff my word that he would only be coached at the 17U level by me,” said Terrance ‘Munch’ Williams, Director and Head Coach of the PSA Cardinals. “Three years later, he may go down as the most complete player to ever wear that PSA Cardinals jersey. It’s safe to say that he has put in his blood, sweat and tears to take this program to a level that most can’t compete with, both on and off the court. On my side, it’s safe to say, that was the best promise I’ve ever made in my life.”

The EYBL ride will soon be over for Anthony, but his basketball days have just begun. He began to focus heavily on basketball in the sixth grade, but not before being properly cultured by his parents.

“My kids played every sport,” the elder Anthony said. “I’ve never really pushed my kids one way or another. I’ve always let them to follow what chooses them. I think one thing, is you want to introduce your child to as many things in the world as you can. Sports, culture, whatever it is. Try to allow them to take ownership in what they want to do.”

“They’re going to tell you what they’re interested in, you shouldn’t tell them.”

In 6th Grade, Cole let his father know that basketball was his calling. He hasn’t looked back since.

“It’s been awesome to watch him on his journey,” Greg said. “Knowing he loves the game as much as I love it, that just creates a stronger bond for us. It gives us something to talk about something we both have an appreciation of. It connects us”

The next step is college and then a professional career. Anthony is ascending to lottery-pick territory, so it’s time to hone in on the details.

“Intangibles, leadership, learning to inspire.” Greg listed when asked what Anthony can improve on. “Connecting with his teammates and getting them to understand their value. He’s getting better.  It’s not a physicality thing with him. That’s how you win, is applying your talent to inspire your teammates and be successful.”

How far will basketball take Cole? Who knows, but Greg is sure of one thing

Or as Coach Charles put it.

“Cole is owning his destiny.”